Due to the increased need for sustainable energy within the energy transition, the planned goals of 11.5 GW in wind at sea by 2030 are being increased by another 10.7 GW. This figure now represents approximately 75% of the current electricity demand. And it means that wind at sea will be making a major contribution to achieving the climate goal of a 55% reduction in CO2 emissions.

Space was found for this extra wind energy at sea In the North Sea Programme 2022-2027. Two locations are an extension of IJmuiden Ver and therefore in ‘our hinterland’. Interests on the North Sea such as shipping, fisheries, nature, gas extraction and defence were all taken into account when choosing these places. While the planning of the roll-out is yet to be made exact, the emphasis is expected to be on the period 2026 to 2030.

There is also space for another approx. 6 GW wind at sea: which will be not used immediately but can be included at a later time if required. In addition to their use for electricity production, turbines are also being considered that produce hydrogen directly. The infrastructure needed is more favourable at these distances than cables.

Infrastructure and Climate Fund in preparation

The Dutch Ministry of Economic Affairs has already started to roll out these plans, including starting the procedures needed to bring generated electricity to shore and make a connection to the electricity grid. Before summer a decision will be made about a Climate Fund of €1.69 billion that would be used for shipping safety, increasing the sustainability of and adapting the fisheries sector, and strengthening and protecting the North Sea ecosystem.

The current Roadmap 2030 also involves a plethora of activities. Vattenfall’s Hollandse Kust Zuid is now under construction, with turbines currently underway for installation. Crosswind is busy preparing for Hollandse Kust Noord, while Tennet is at the advanced stages of realising the connection for Hollandse Kust Noord and near Wijk aan Zee by laying cables and building a transformer substation.

The tenders for two Hollandse Kust West are now open until 12 May. The winners will be announced after summer. With the Netherlands Enterprise Agency expected to publish the schedule for the IJmuiden Ver tender soon after, we will be seeing plenty of activity off our coastline in the years to come! 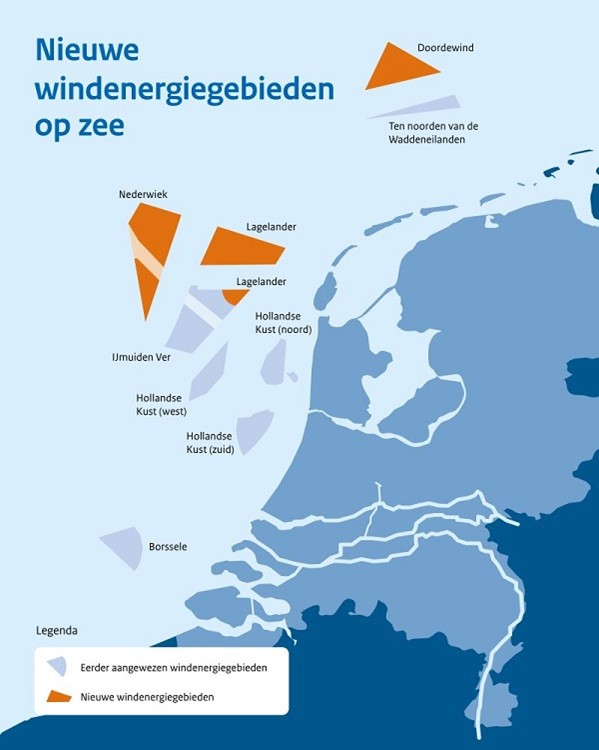