“Bring on the platforms! We’re ready!”

Koole Group’s brand-new decom yard in the Amsterdam port is ready to dismantle discarded maritime objects in a circular way. How that works will be shown to the wider decommissioning market during the DECOM Amsterdam Live Event on 29 June.

“There, see that vessel on the quay… We can officially start dismantling her in two weeks,” says Jurgen Treffers, pointing from his office window at De Sliedrecht, a visibly outdated 500-tonne vessel that has just been hoisted out of the water. The vessel will be neatly taken apart by the yard’s crew, with all materials sorted and all hazardous materials properly disposed of. As much as 97 percent of a vessel can be recycled. And once all the materials have been broken down and removed, the next vessel will take its place on the quay. 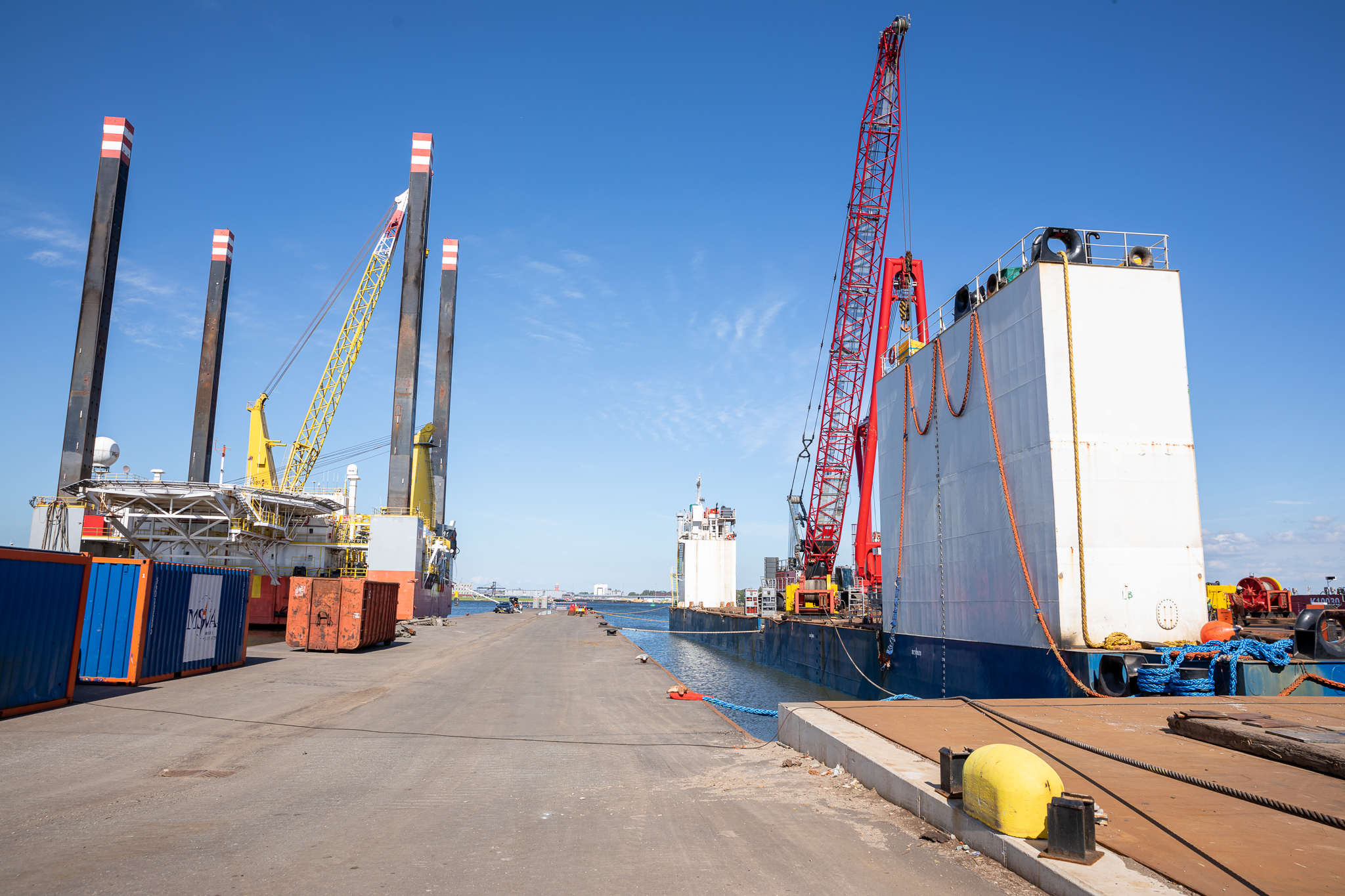 Over the coming years there will be a constant coming and going of decommissioned maritime objects from the North Sea at this yard, all dismantled and recycled in a sustainable way. These objects will range from old ships and unwanted oil & gas platforms to discarded wind turbines in the future. The yard is sixteen hectares in size and has its own quay suitable for mooring vessels with a draft of up to nine metres and length of up to 150 metres. The plan is that vessels will be dismantled on the right side of the premises, while the left will be accommodating oil and gas platforms.

The yard is owned by DECOM Amsterdam BV, a partner company of Koole Group from Vijfhuizen. Jurgen Treffers is financial director and also head of the yard as managing director. He and his colleagues have been working two years straight to organise everything from location to licenses, and were finally able to start operations in late May 2022.

In the meantime, Sylvia Boer greets us cheerfully as she enters Jurgen’s office, which is still located in two converted construction containers due to ongoing building activities. Sylvia is director of AYOP, the networking organisation for companies in the offshore energy sector in the area from Amsterdam to IJmuiden.

What is your involvement in this yard, Sylvia?

“None, in principle, but AYOP did stimulate and encourage this initiative. We had been aware of the potential for sustainable decommissioning of offshore objects for years but didn’t have a location in our region. Until Koole stepped in. They had plans for a repair yard, and AYOP thought: what if they can add a decommissioning yard as well?”

Jurgen responds: “It sounded interesting. In the coming years we expect a considerable number of projects in the field of decommissioning. Together we looked for partners from the region to ensure we could realise the entire decommissioning process from A to Z, and this eventually resulted in the DecomMissionBlue partnership. We function as a type of central hub from where all those parties can operate.”

Sylvia: “We can tell clients that the dismantling is performed in a sustainable way, and that it saves costs because we are all located close to one another. This makes the process a lot more efficient.” 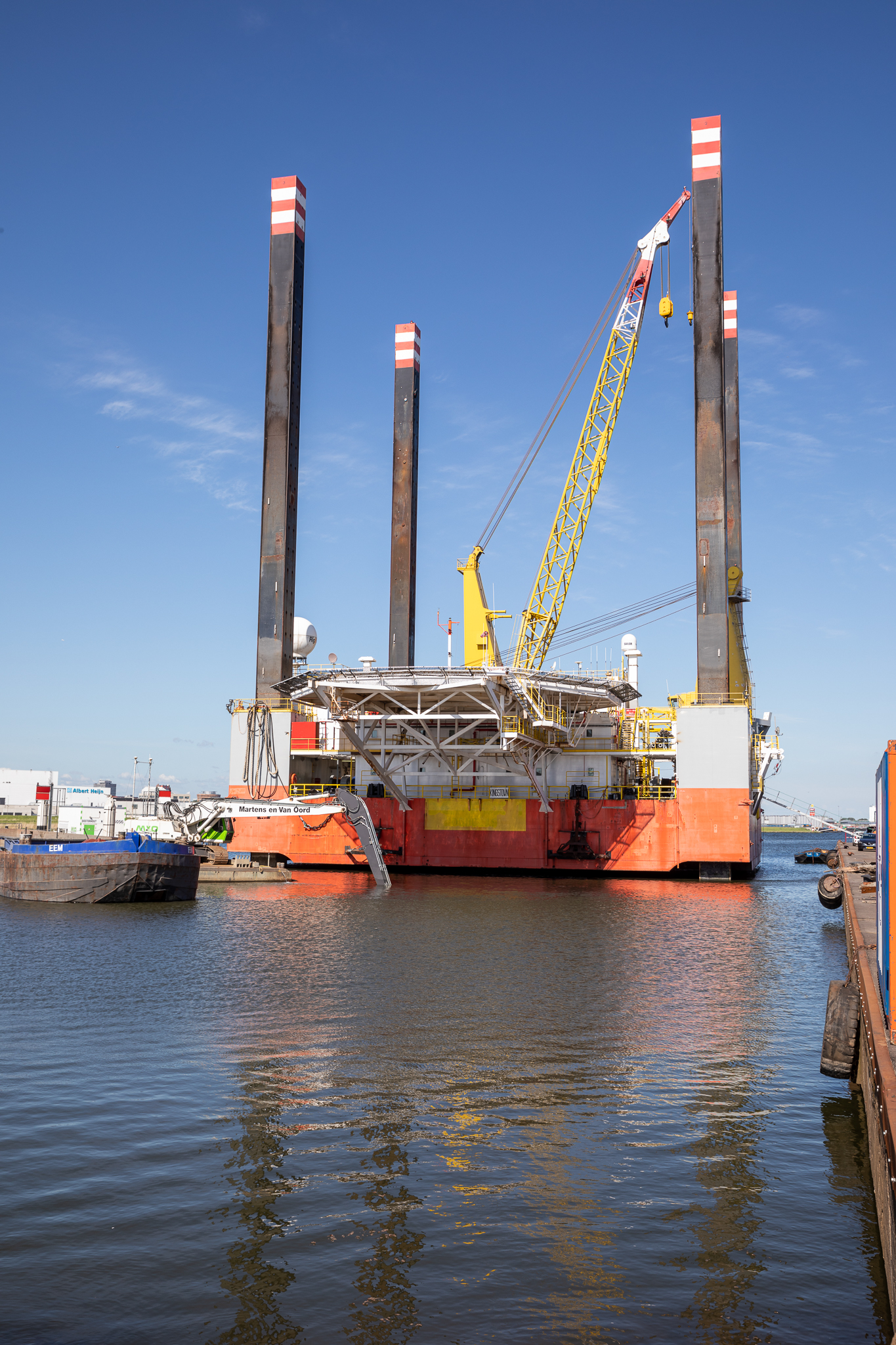 Why was it interesting to start a yard here?

Jurgen: “This area used to belong to ADM (Amsterdamsche Droogdok Maatschappij, ed.) and was then squatted for many years. When we heard that the squatters were being evicted by the municipality, we saw a good opportunity for a yard on this site. It is located on the North Sea Canal, on deep water and near Amsterdam, all of which are favourable aspects. It used to be a disadvantage that the locks of IJmuiden were only 50 metres wide, but since the expansion to 70 metres was completed in January we can now accommodate larger objects too.”

Sylvia: “Until recently, there were only two decommissioning companies in the Netherlands – in Vlissingen and Rotterdam – but none in the Amsterdam region. Yet this is the ideal location for discarded platforms, which are mainly located in the northern part of the North Sea. And you don’t want to have to transport these platforms too far nor have long sailing times due to the presence of hazardous materials. The shorter the distance to the decommissioning yard, the better.”

You mentioned bulk projects in the near future – what do you mean, exactly?

Jurgen: “I was referring to the 400 oil and gas platforms on the North Sea that will have to be dismantled at some point as they no longer produce, are no longer profitable or have become outdated. The owners have to remove and dismantle these platforms – this is already happening incidentally but the bulk are still to come, and we’ve been talking about it for ten to twelve years.”

Sylvia: “Next step, the organisation representing EBN and the Dutch oil & gas industry, makes a good yearly analysis of the work they expect in the decommissioning sector. Unfortunately, the peak they are anticipating keeps moving forward every year.”

Jurgen: “Decommissioning mainly revolves around costs for platform owners and very little inside. It’s that simple.”

Sylvia: “They are obliged to remove them but no term has been set – that’s the main issue.”

How do you think this could be sped up?

Sylvia: “Setting that term, like they recently did in Australia. I don’t care if it’s two, five or ten years, as long as there’s a deadline. This is the only way to make sure actions are taken.”

But you can’t just say: fine, just let those platforms stand there, they’re not harming anyone?

Jurgen: “You could, but there is such a thing as social responsibility. It shouldn’t be possible for someone to make lots of money extracting oil or gas and then just leave the platform to corrode once the stock has run out. That’s not how it works. The polluter should always pay and people should clean up what they created. But there is just too little pressure on companies to get to work.”

Sylvia: “In addition, the North Sea is getting fuller and fuller. We are installing an increasing number of wind farms at sea, fishing and aquaculture are expanding sectors due to the growing world population, and then there is the shipping sector and an ecology we have to preserve. So, I hope there will be some insight among companies that the old has to make way for the new.”

If the decom projects are still in the future, isn’t it risky to start a dedicated yard for this purpose?

Jurgen: “Yes, it’s a bit risky, but that’s what makes us entrepreneurs. We look forward to the future and know that, at some point, the platforms will be arriving. In addition, we can use the yard for our own activities. We have our own tugs and pontoons we can moor in our marina to prepare for international maritime projects. We are currently mainly focused on dismantling vessels that have been taken out of use.”

Sylvia: “And, once you attract a platform, that will provide work for at least six months.”

Jurgen: “Indeed. These platforms are much like small factories, including sleeping accommodations and sporting facilities for the crew. It will easily keep us busy for a few months.”

When will they be arriving, these platforms?

Jurgen: “They will come. Until then, we can operate profitably without any issues. But it would be the icing on the cake if we could start with those 400 platforms on the North Sea. Bring them on, I say! We’re ready.”

Sylvia: “It’s also a valuable narrative that the owners don’t have to transport the platforms abroad, but can have them decommissioned right here in the Netherlands, in a sustainable and circular way.”

Something else. This yard will be the setting for the DECOM Live Amsterdam Event on 29 June. What can we expect?

Sylvia: “It will be a great event, a type of festival that is expected to welcome some two to three hundred professionals from across the decom industry. Everyone from the sector will be there and AYOP is organising the event together with a sister organisation from the UK, Decom North Sea. There will be a content-led presentation about a specific topic every hour, and plenty of space to network and meet people. We will host this all here, at the yard – in a large tent in the middle of the premises, our main stage, plus stands for companies and catering. Entrance is free to everyone. Moreover, on the evening prior to the event, there will be a special port boat tour which will pass by a number of locations related to decommissioning, followed by a networking dinner. It will be a wonderful event and I am very much looking forward to it.”

What can we expect from the event programme?

Sylvia: “One of the most interesting features for me will be a lecture by David Molenaar on the standardisation and circular design of wind turbines. And then there’s Rolf de Vries from Bluestream who’ll be sharing experiences on the decommissioning of platforms. The Amsterdam Fire Brigade will be bringing two firefighter boats, and Amsterdam company DEEP will showcase its unmanned surface vessel which helps map the sea bed and can also be used in decommissioning projects.”

“What I really like is that the event will put Amsterdam back on the map as a port city,” says Jurgen, leaning forward. “ADM used to have a huge shipyard on these premises where they built and launched the largest maritime vessels. All maritime activities disappeared from the Amsterdam port at some point,, which was a real shame. The focus shifted to transhipment, storage and distribution centres instead. But what’s a port without maritime activities? We have brought back a real yard, with ships on the quay that need to be repaired or dismantled. The Netherlands should be proud of its maritime heritage and history, and we’re happy to continue it with our new yard. Or am I being overly enthusiastic?”

Sylvia Boer laughs: “There is no such thing as too much enthusiasm, if you ask me. It is a good thing to put Amsterdam on the map as decommissioning capital. And that is exactly what we are doing.”

The DECOM Live Amsterdam Event on 29 June will take place on the newest decom yard in the Netherlands in Amsterdam. The previous day, June 28, a port boat tour and networking dinner will be held from 16.30 to 20.00. The opening of the event is scheduled for 09.30 on Wednesday 29 June, followed by presentations by experts such as David Molenaar (Siemens Gamesa Renewable Energy), Nina Vielen-Kallio (ECHT), Harals van der Mijle Meijer (TNO) and Rolf de Vries (Bluestream Offshore) throughout the day, a lunch and a networking social from 16.30.

You can register for the free event via the site ayop.com/nl/decom-live-amsterdam.

Sylvia Boer (1982) has been director of network association AYOP since 2020. She has a background in the maritime sector and previously worked at Damen Shipyards Group and Netherlands Maritime Technology. Boer is currently focused on promoting the interests of offshore wind and the decommissioning sector.

Jurgen Treffers (1968) has been associated with Koole Group as CFO since 2010. He has a financial background as director in the banking sector at ABN AMRO Bank and Rabobank. In addition to the financial affairs of Koole Group, Treffers is involved in establishing international contracts for the salvage and dismantling of vessels worldwide.

This interview was published in the June 2022 edition of Maritiem Courant.